Love British Food’s ‘British Food Fortnight’ runs from 22 September to 7 October 2018. It is the biggest, annual celebration of British food and drink. The following guest blog has been written by Manchester WI about a special beer that it brewed in partnership with a local brewery in Manchester, to celebrate 100 years since some women were given the vote for the first time.

President Shelly shares how members created ‘Lady Grey IPA’, why British independent produce is important to them and how the beer has been received in the local community… 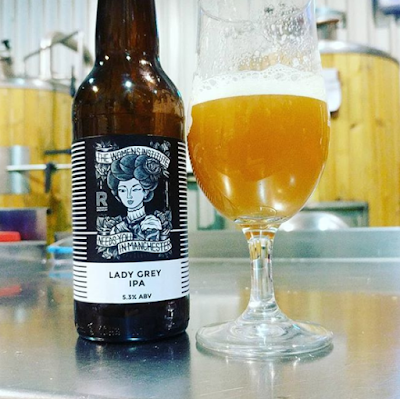 Manchester WI and Runaway Brewery celebrated the 100th anniversary of the Representation of the People Act 1918, which granted some women the vote for the first time, and International Women’s Day 2018 by brewing a limited edition beer called ‘Lady Grey IPA’.

We wanted to celebrate votes for women by doing something a little out of the ordinary that lots of people across Manchester could enjoy. Brewing a beer 100 years on from the first women being granted the vote shows one small way how far women have come in the last 100 years – it’s about demonstrating equality in a fun way that other people can join in with.


All of our members voted on the flavour of the beer and tried testers at our Christmas party last year. The final product was infused with Lady Grey Tea, Bergamot and citrus zest for a delicately perfumed, fruity IPA.

We had decided to launch the beer at the beginning of March, to coincide with International Women’s Day (8 March). During the week in February that marked the centenary of the Representation of the People Act 1918, members spent a day at The Runaway Brewery, getting stuck into the start of the brewing process.

As a local community group, supporting independent businesses in our community is very important to Manchester WI. We wanted to work with a local brewery that we could really get to know and become friends with, it’s been a great experience and Mark and his team from Runaway are definitely honorary WI members!

On Saturday 10 March Runaway opened its doors for the Lady Grey IPA Launch Party and there was an open invite to beer lovers across Manchester to come and raise a celebratory pint.  Seven other beers all brewed on site were available, plus we were joined by Steep Soda serving locally made, all natural soda on their pop-up gin bar - so something for every taste!

The Lady Grey IPA Launch Party soundtrack was an eclectic and celebratory mix of female led bands and artists with recommendations from across the decades suggested by Manchester WI members.


Mark Welsby, the owner of Runaway kept back two kegs of Lady Grey IPA for the launch – which were all drank before the end of the day! The rest of the beer was distributed around pubs and restaurants in Manchester and sold out in record time.

A percentage of the price of each bottle and pint went into the Manchester WI bursary fund, supporting the WI’s original purpose of education for women. This raised us over £200, giving us a fantastic boost to the bursary fund available for our members this year.

We’re thinking about brewing another beer for International Women’s Day 2019 following the success of the Lady Grey IPA!