‘No Planet B’: WI members speak up about climate change

From Cambridge and Corsham to Ceredigion and Cornwall, on the 17th June WI members from across England and Wales joined over 9,000 people in Westminster for the biggest ever lobby of Parliament on climate change. With their bunting and banners prominently on display, they each spoke up about how what they love is being threatened…and asked their MP to take action. Here WI members share what was on their mind that day and how their meeting went. 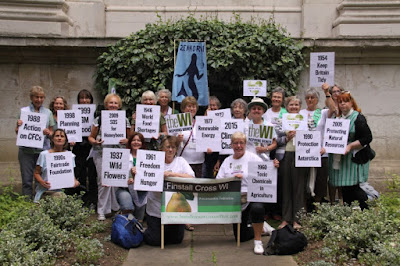 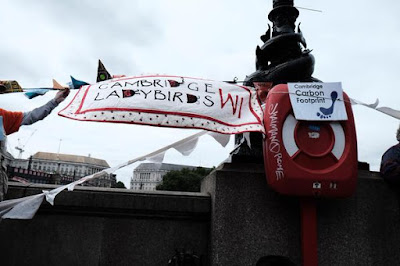 Concern for future generations was a high priority. As Jo (Buckinghamshire Federation) explained: “I'm concerned with climate change as I feel our general apathy means we will lose all the diversity we are so lucky to have. My great grand-children will not think of us with the respect we have for our predecessors if we let this happen.”

Evelyn (Middlesex Federation) was also thinking of her grandchildren and their futures when she spoke to her MP: “I have grandchildren and am thinking of their futures. I can think of those living in poverty now who will face even greater threats from rising sea levels and degradation of land through droughts and floods; I can think of the loss of biodiversity, plants and animals that would go extinct but mostly I think that I need to do my best, to know that my descendants won't have to say – why didn't she do something about climate change and its consequences before it was too late.”

“We managed to make contact with our MP, Gareth Thomas, Harrow West, and arranged to meet with him at Portcullis House. We made our way there and he came out to speak with us, for about half an hour.  It was a good meeting and we were encouraged that he took on board what we were saying and was also making the 'right noises' himself, including what he had achieved when he had been a Minister in Government. We have left it with him that we will email him with several points that were raised during our meeting and he would take the matters further on our behalf, most encouraging!”

The loss of nature and biodiversity was also at the forefront of Catherine and Claire’s minds. Catherine, from Buckingham, explained: “Action on Climate Change is important to me because I can see how we are damaging our Planet Earth and we need to take action to help reduce the risk of extinction of wonderful wildlife and respect and live in harmony with nature more.” Claire, who had travelled all the way from west Yorkshire, agreed: “I love gardening and find it very creative mixing shapes and colours to get the effect I see in my mind, as well as then having to take the seasons into account. Gardening and beekeeping take up most of my time and the loss of plants and bees would be tragic for both for our planet and me personally as I might then have to take up housework and cake making!”

Angie (who travelled from Brighton) noted this has been a long-time concern: “Climate change is something which I have been aware of since I was at school in the 1970s. The deterioration of our environment is something we are responsible for now and always. If we don't address the factors affecting climate and the state of our land, rivers, seas and air, it will cause incalculable problems, suffering and conflict.” But it was Jen (from Lewes) who summed up the urgency: “human activity is causing our climate to change in ways that affect poorer nations most, and also affect all nations. If we continue on our present trajectory, we will surely destroy our planet, and, as one of the placards read, we have no Planet B! The time to act is NOW”.

2015 is an important year for climate change as we fast approach the 21st United Nations Framework Commission on Climate Change Conference of the Parties (UNFCCC COP) which will be held in Paris this December.  All governments will need to work together to reach an ambitious, fair and legally-binding deal that will cut carbon emissions and limit global warming to 2˚C – something that WI members were quick to point out.

“We know already deserts are increasing in size, islands are disappearing, and people are losing their livelihoods. At the moment it is the poorest who suffer most: everybody needs to know what is happening so that we can build huge pressure to stop all use of fossil fuels, enable developing countries to obtain all their energy from renewables, and keep warming to under 2˚C,” said Pippa, who travelled from Cornwall and spent about 45 minutes with her MP, Derek Thomas, talking about all sorts of issues, both local and national.

Maggie (Wiltshire Federation) continued: “I do feel that it is important to keep up pressure on the government so that they realise it is essential to get an appropriate global agreement which is fair to all countries. The lobby day must have made quite a lot of MPs realise that they do need to find out more about climate change if they don’t already have that knowledge.”

Maggie was pleased to have met her MP Ed Vaizey: “He did give us an hour and bought us all a cup of tea!  He listened to what everyone said (16 of us) and answered questions where he could.  He seemed impressed that all 16 of his constituents had come to the event – none of them knowing each other beforehand….I enjoyed the day but felt the most important part was talking to my MP, who I had never met before. He promised to arrange another meeting in the constituency in a couple of months’ time to discuss climate change options in more detail – I will be impressed if he does this.”

For Celia (also from Buckingham) it is the lack of mainstream media attention which she finds so frustrating: “My really big concern about climate change is the way that the subject is being consistently side-lined in the media. There seemed to be no reports on the main television news or in the press. There is still a massive barrier to understanding and accepting the need for action on the part of government and general public.”

Celia was really pleased to have joined the lobby queue, especially as initially she did not think her MP would be coming: “I was very pleased that my MP, Steve Baker, who did turn up once he had been tweeted by the 7 constituents who were anxious to talk to him…so at least we did get a chance to say what we thought.”

While each WI member had a different reason for why they were speaking up, they were united in their message to their MP:


And what they all agreed on was the sense of solidarity that the lobby brought. Claire best summed it up: “The most enjoyable part was chatting with the like-minded people we met in Victoria Gardens. It gave me a real boost because for all climate change is now gaining recognition it often feels a little isolating in some groups and conversations when one believes it is the most important thing both nationally and globally.”

For more information about this campaign: http://www.thewi.org.uk/campaigns/current-campaigns-and-initiatives/the-climate-coalition-for-the-love-of